Difference between revisions of "Rule expansions"

Rules are the basic building blocks of Filters.

With the Release of Gramps version 5.1, the first addon Rules were released as examples of coding a Filter Rule addon. Installing similarly to any other addon, a New Rule appears as a menu item within Add Rule dialog while Defining a custom Filter.

Filters created with these Rules can tested, cloned or deleted using the Filter Editor. The dialog is invoked from the Edit menu in each Category view.

The Plugin Manager can be used for more than installing & updating plug-in modules. It can help you discover the growing capabilities that might not be obvious.

Open the Plugin Manager from the Help menu and use its Search box to filter the view to only those addons which have a row or filename which include the 'Rule' term.

Add-on Rules that have been peer-reviewed will be added to Gramps' Update Manager system. This automates the installation process

When manually installed, each add-on rule's Python source code (.py) file and Gramps Plugin Registration (.gpr.py) file will be located in the \gramps5.1\plugins\FilterRules\ subdirectory of your User Directory

Looking at the Info on any currently installed Rule will verify the file location where add-on rules have been installed.

Matches families with an event with a selected role

Matches people with an event with a selected role 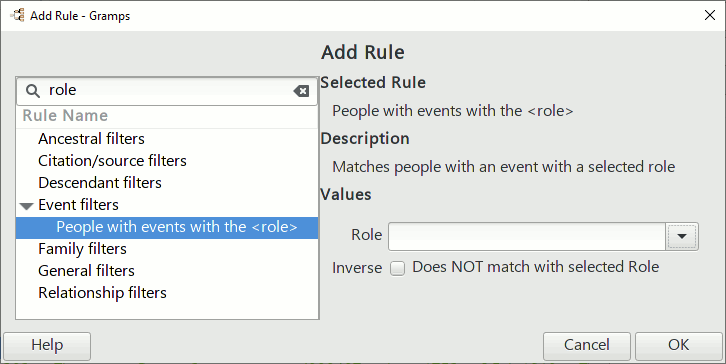 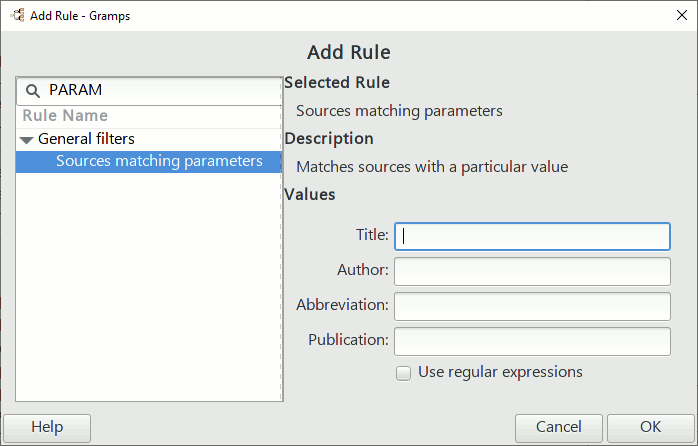 The Evolution of of Rules as Add-Ons

The 5.1 release changed the default database backend from BSDDB (Berkeley database) to SQLite. With the broader group of user familiar with optimizing searches, it made sense to open Gramps to the specialized knowledge.