An overview of countries with the relevant genealogical information about them:

What is a Place?

A Place in Gramps generally refers to where an event occurred. This is different to an Address (see for example Why residence event and not Address?).

A place is a geographical region of any size ranging from that of a country to a burial plot. Boundaries of a place may vary over time. The latitude and longitude of an approximate centre point can be recorded.

A Gramps ID and place type can be specified.

Notes and media can also be attached to a place.

A place is identified by a name which may change over time and can be entered in different languages. For example, the city of Saint Petersburg in Russia could be defined with the following names:

Assuming the default Places Preferences settings of auto-generation of titles is enabled, automatic place title generation will choose the appropriate name, given the date of an event and the language code specified in the preferences. Where there is no event date available, or if the place is displayed without reference to an event, then today's date is used.

The main name is processed before the alternative names. 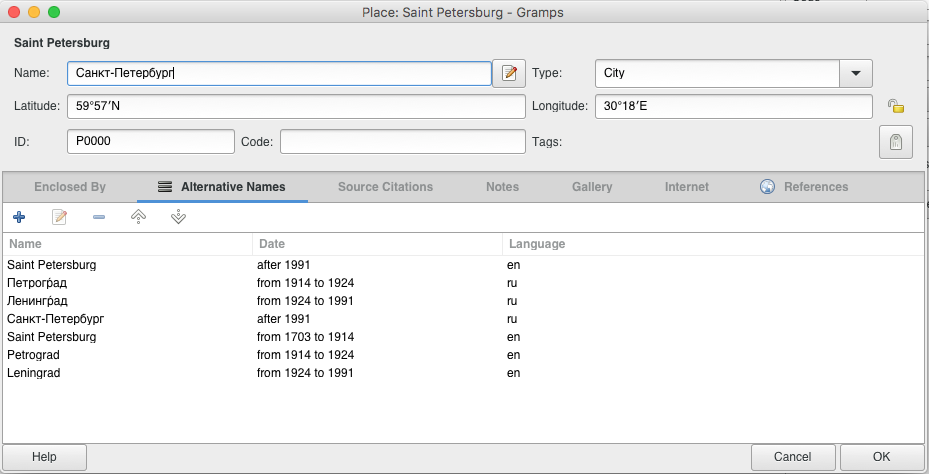 For example, Figure 1 shows the Place view for the above described Saint Petersburg. Note the order of the entries, the date ranges, and the language codes. 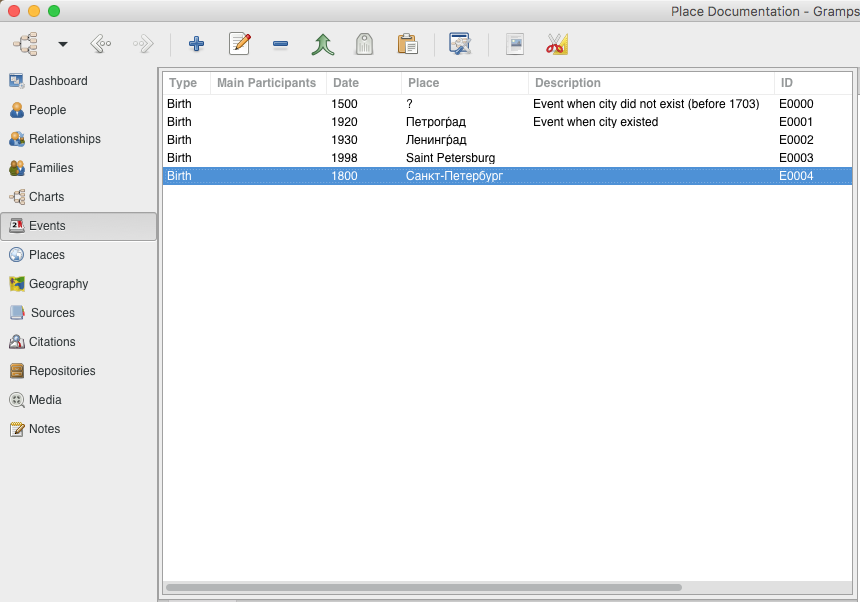 Events can be created at specific dates for this place and the title generation will follow the rules above. In the first event in Figure 2, the title generated is '?' because the place has no entries for this date (1500 is not between 1703 and today). In the second event in Figure 2, the generated title - Петрогра́д - corresponds to the first place that matches the date range since the language preference setting is blank. In the fourth event, again the generated title is the first place that matches the date range. Note that the order of the Alternate Names in Figure 1 is important in title generation when the default language is blank. If the Language is specified in the Places Preferences, then that language will be used if found. If the language is not found, the first date match will be used.

The title generation is done at the event update, and it not refreshed if the Place is edited. In the case where the Place is updated, the event would have to be subsequently updated as well to regenerate the title with the corresponding change in the Place. 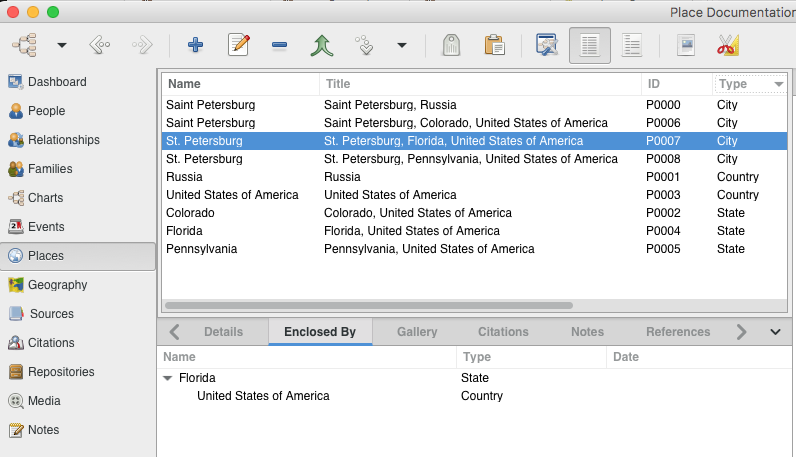 Places can be linked together to form a hierarchy. This enables different places with the same name to be distinguished from each other. For example, there are also places called Saint Petersburg outside of Russia:

A title can be generated by following the links. So "Saint Petersburg, Russia" would describe the city in Russia. Figure 3 illustrates the Place Editor view (with autogenerated titles) for these cities. 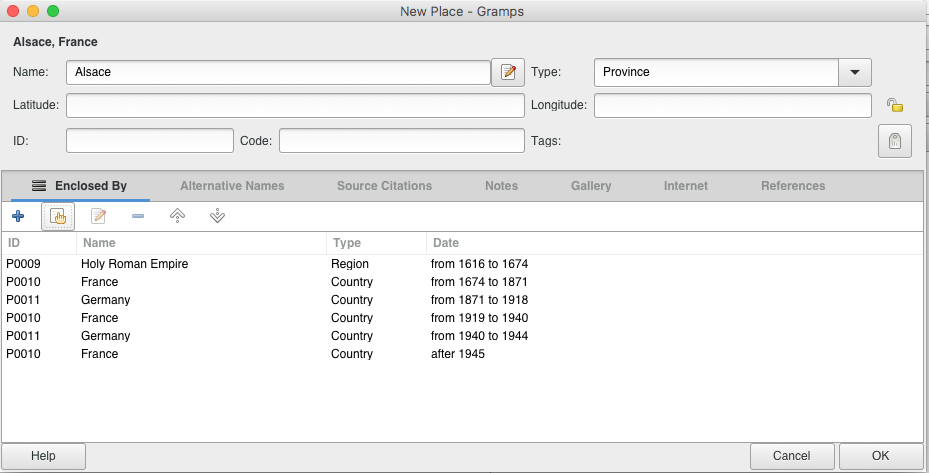 The place hierarchy can also be used in filters, to find all places located in another place.

Multiple links with date ranges are allowed. This makes possible more complex cases where a place moves from being located within one place into another. Alsace makes a good example:

Figure 5 is the Event Editor view which illustrates that the generated title for an event is based on the date of the event when traversing the place hierarchy.

Places in the hierarchy provide standardized titles. Event attributes with a key of "Place" can be used to record places as described in a source.

This allows spelling variations to be recorded without the need to create extra places. It also allows more than one place to be recorded for an event.

Places Category View lists all the places in your Gramps database, and is a handy spot to make sure your places are named consistently.

Gramps also provides a window in which you can edit a place:

Enter the Name and Type of the place in the fields provided. The ID field will be populated automatically by Gramps.

The Code can be used to store a country code or postal code.

The region in which the place belongs should be recorded in the Enclosed By tab. Every place except for countries should have at least one entry. Multiple entries are useful to record a place that has been part of different administrative regions over time. The first entry in the list will be used to construct default place titles.

Variations of a place name over time or different language versions, can be recorded in the Alternative Names tab.