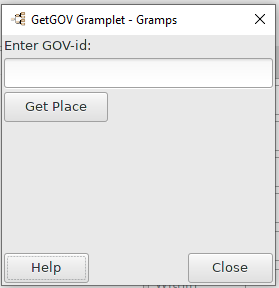 The GetGOV Gramplet is designed to download place information from the GOV gazetteer. This information can include

Instead of the default Place ID Format numbering (Pxxxx) for the imported places, the GOV-id will be used as the Place ID. If additional imports are performed, duplicate places (even part of the Enclosed By) will be automatically merged.

It is designed to be installed as a gramplet on the Places Category (List/Tree) view.

The language is set in the Edit -> Preferences.. tabs Display and is described in the Place Format Editor. This is used as the preferred language for place names and types which are imported. The default language is German.

If the Preferences -> Places tabs Language is set, then this is used as the preferred language for place names and types which are imported, otherwise, the preference is German.

This example shows how the gramplet would be used with the GOV gazetteer website to import the place Frommenhausen.

To see what data will be imported, you can drill down in to the GOV-id.

Enter the GOV-id into the GetGOV gramplet on the Places view.

The resulting places with Latitude and Longitude are loaded. Note that the Place Type is in the same language as the Place. Note that the ID is the GOV-id and not the default Pxxxx numbering. If you use the Reorder Gramps IDs tool, it will change the ID to the default Pxxxx numbering. Later use of this gramplet may import duplicate items (with different ID) since the Gramps ID is no longer the GOV-id and duplicates will not be identified. For instance, if you import FROSENJN48KK and then use the Reorder Gramps ID tool to reset the Gramps ID, if you reimport FROSENJN48KK or any other GOV place that is already imported, you will have duplicate places for every item imported.

The Place hierarchy is also loaded as defined in the GOV database. This includes the Enclosed By information which may be time-dependent as illustrated.