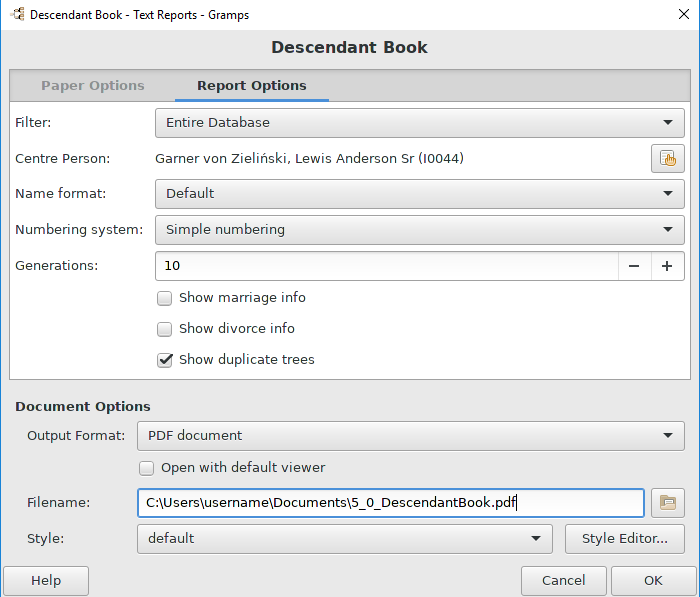 Both reports are based directly off the Descendant Report and Detailed Descendant Report's, the main difference being instead of just producing a report based on the Center Person, it allows for the use of a built in Query or Custom query. This idea is to produce as many descendant reports as is required to satisfy inclusion of all individuals within the given query.

If for instance "Entire Database" is chosen as the query to use. Then the entire database is traversed and a unique list of ancestors is determined and then a descendant report for each of these ancestors is produced.

If one only report is produced, no table of contents are generated.

To date my most common usage is :

I find that running of either report using the Entire database is really useful for highlighting potential people in my database that I've not linked up, dangling tree elements etc.

Again really useful to get a complete accurate picture of the entire family tree of an individual, pretty much includes all cousins of this person. Up to now to print this you would first have to determine all the possible ancestors of this person, and then manually generate a descendant report for each of these ancestors. By running this report we get all these reports generated in one go and a table of contents to boot !!

Some of these differences I would hope end up in Trunk/Core, as such there are bug/feature requests logged for these. If the bugs are marked resolved then they've been integrated and you can ignore the reference here, or better still ping me to remove this reference or edit this page your self and remove it. 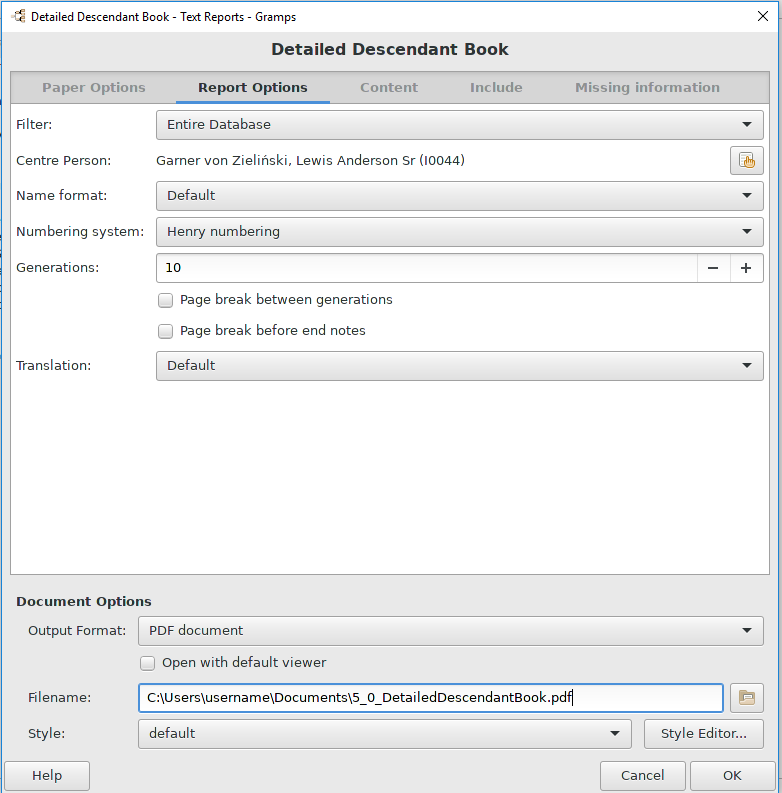 Depending on the filter chosen, a number of Descendant reports may be produced to generate the book, and as a result of this the exact same dependent family tree could get printed in more than one report. This is not an issue if only running one report, but for the purpose of this book it just means potential wasting of paper, and potential confusion. With this in mind, any report contained in the book after the first one which contains a family that has already been printed (including any/all descendants of that family), will not get printed in subsequent reports but instead will have a reference to the exact report and location in that report.

If an individual has been printed already in a previous report, instead of printing all that individuals details just provide a reference to the report and location in that report where their details can be seen. Kind of similar to the "Same as person" output seen at the moment, except it spans reports.

If an individual appears in more than one report, then a new section is printed under that person indicating all the reports this person appears in.

Versions for Gramps branches 3.4, 4.x and 5.x are available for installation via Gramps Addon manager.