This page is intended to be a discussion of improving the management of a collection of supporting documents related to a genealogy Tree. Since Gramps has limited built-in facilities related to managing external files, the techniques will focus on workarounds and using external tools in concert with Gramps.

A good discussion will need contributions from many perspectives. Please jump in and widen its currently narrow perspective. But multiple simultaneous WikiContributors can step on each other's edits in MediaWiki pages. To avoid this, edit individual sections instead of the entire page. To add new content, start by adding a Section Heading (subtitle) at the bottom of the section above and save the Edit. Then click the [edit] hotlink beside your newly created section's subtitle.

There are exceptions. The creation and restoring of backup archives includes the option to include file copies of Media objects. And some Media related addons recognize paths with internet URLs and have the option to automatically download and shelve copies somewhere on local storage devices. Gramps also manages thumbnails and downloaded map tiles in the User Directory. 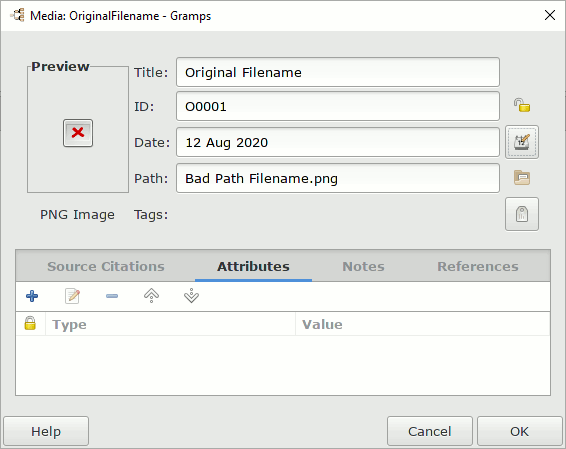 However, the majority of the tasks managing of Media Objects must be performed outside of Gramps. You can just toss objects into a directory and link to them. But this will contrive a disorganized mess that will quickly become a maintenance nightmare. If the files have to be reorganized, Gramps will lose track of those files until you correct the paths. In the meantime the links will have a 'broken' indicator.

Before computerization, the metadata system used by libraries consisted of 3 duplicate index card catalog sets... sorted by: Title, Author & Subject. Maintaining an effective index required carefully sequencing the reference materials on the shelves sorted by a 4th addressing system. (Such as the Dewey Decimal system.)

Unlike most Preferences items, the Base path for relative media paths is stored in the Tree data. For the Extensible Markup Language XML archival .gramps format, there is a <mediapath> element in the Header chunk. This means that a different media path may be set for each separate Tree.