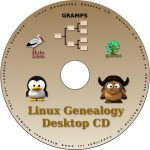 As well as GraphViz the program that draws pretty charts and graphs in Gramps.

This Live CD is based on the Ubuntu 10.10 (The Maverick Meerkat ) Desktop CD.

In addition to the Live Session, this disk also allows permanent installation of Linux and genealogical software on your computer's hard drive. This way you achieve adequate speed and the ability to save your data, and can do real work with your Linux software. Everything is similar to the Live Session, except that this is a permanent setup.

The CD can be downloaded from:

If after installation, your desktop is not fully translated to your selected locale:

Thanks to Alex Roitman, the details to create the Live CD are now available for future development. If you would like to contribute to this please email the gramps-developers mailing list.

There is a script for OpenEmbedded support or buildroot, crosstool-NG, PTXdist, ...