1. Plan the research visit to a Repository

Aunt Martha (AM) is planning a visit to a one of her Gramps Repositories: the UK National Archives at Kew, London.

She produces a report from GRAMPS that tells her all of the Sources that are held in the National Archives that might be of interest to her.

The report also gives her a list of all the people in her Tree that could potentially appear in those Sources while marking (via stylesheet allowing font options such as single/double strikethrough, color or typeface) or hiding those to which she already has the source attached.

She also generates a detailed checklist report which includes a table with a row for each person and a column for each piece of information that the Source should contain. Again, Person already cited have a check in the column and the row hidable or styled.

She prints out these reports for use while she is at Kew.

AM has discovered the Ancestry is a great Repository that she knows is a good place to find genealogy sources relevant to her database. She wants to import the information about the sources that are held by Ancestry so that she can start her research.

She clicks on the 'Import Repository' button and gets a list of all of the Repositories that are in the online GRAMPS Repository database and imports Ancestry. This populates the Sources that are contained in Ancestry and adds Ancestry to her list of Repositories.

She selects her Grandfather (Frank) in the Person View. GRAMPS shows her a research plan for Frank that shows all the Sources in which supposedly mention Frank (but have not yet been fully validated to support an event) and the type of information that can be found in each Source.

(Some of these sources had been logged in Gramps because they had been cited in Secondary Sources. But AM wants to capture the originals.) 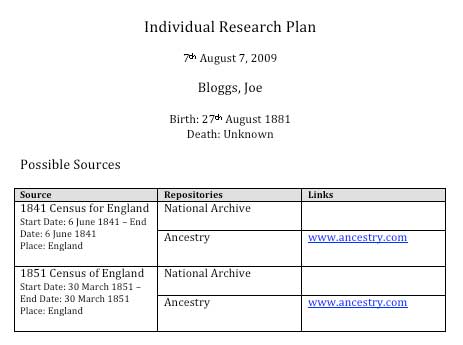