Many users, particularly if they aren't experienced researchers, may have difficulty abstracting the details from the wide variety of source types they encounter into the 4 fields that Gramps provides. Worse, the 4 fields aren't really adequate to capture all of the possible source information and redisplay it in well-formatted footnotes or endnotes in a report or reference links in a web page.

Elizabeth Shown Mills (1944-   ) [broken linkhttp://www4.samford.edu/schools/ighr/faculty/mills_e.html Internet Archive page] is an eminent American genealogist who has written extensively about collecting, analyzing, and citing evidence in genealogical research and publications, including the books "Evidence! Citation and Analysis for the Family Historian" and an expanded version, "Evidence Explained: Citing History Sources from Artifacts to Cyberspace". (The 1st edition was awarded the Library Journal 2007 Best Reference. A revised 3rd edition was released in 2018)

While most readers focus on the formats of the citations provided in the books, in reality every publisher has a style guide and Evidence Explained isn't used by any of them. The real value in these books is Mills's explanation of how to effectively analyze the evidence and how to integrate the many pieces of evidence (and Mills is well known for taking the "reasonably exhaustive search" requirement of the BCG's Genealogical Proof Standard to the absolute limit) into a well supported conclusion.

Citation styles are the concern of published material, and will differ both for the medium and for the publisher. So long as the necessary information of creator, title, enclosing work (for e.g. magazine or jouranl articles), publisher (if published) or repository (if not), date, and details (like page number) are available in the citation, the style isn't very important to the reader. Publishers want all of their publications to have a consistent style and issue style manuals to help authors prepare their work.

For a computer program like GRAMPS, the goals should be to collect all of the necessary information noted above in a way that is easy for users to enter, to support evidence analysis and comparison to create "proof arguments", and to link those proof arguments to the genealogical conclusions in the database.

A simpler template system is "Simple Citations", see the templates.

As an example of discussions of use of Evidence Explained we may consider citation for the UK Census. Anatomy of a Census Page provides quite a good general illustration of the use of Class, Piece, Folio and Page (though it shows only the 1891 census). UK Census Citations shows how this scheme applies to other censuses.

There is a subsequent extensive discussion that may (or may not?) suggest changing (part of) the reference to

In a separate discussion in the Evidence Explained forum, 'Ann' asks:

(because the folio and page are part of the TNA reference) which ESM calls workable but queries whether there is enough geographical information, while 'Ann' comes up with the following reference:

We need for this

If we decide "yes" to above, then source and citation objects must be changed, upgrade must be done.

In branch - testing of ideas 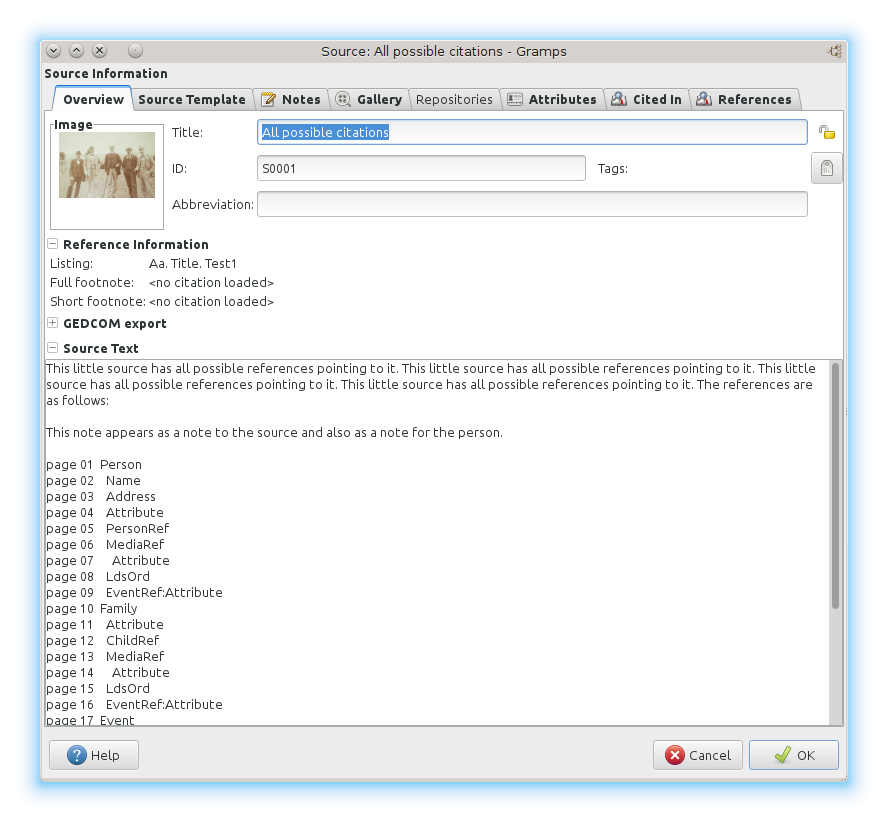 A Cited In tab shows all citations and where they are used: 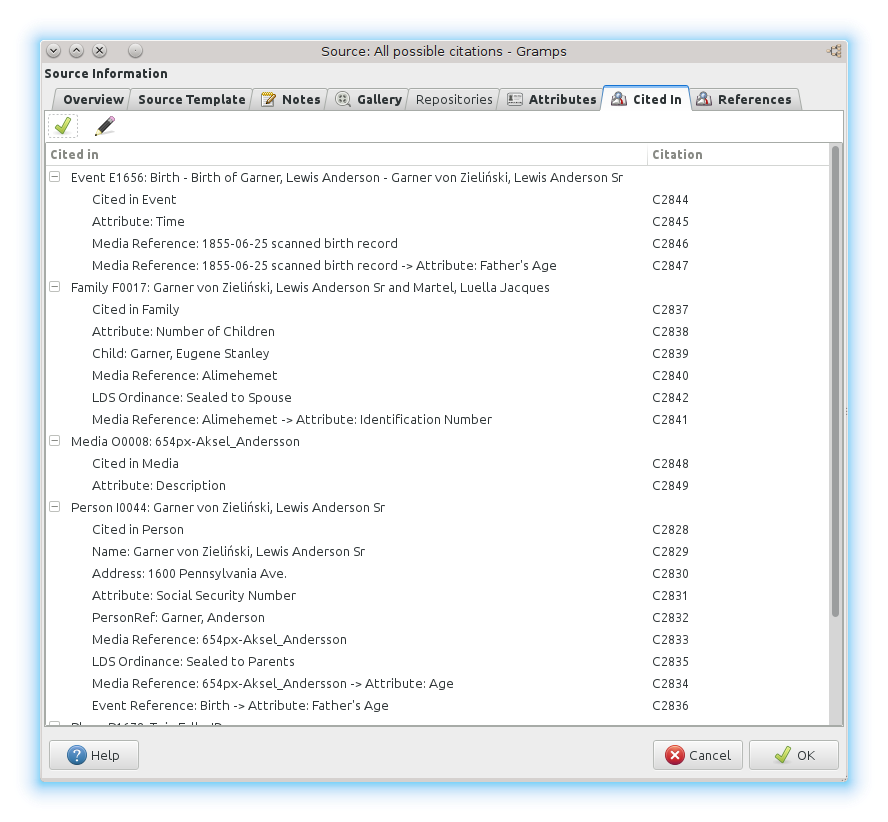 From that tab, different citations can be loaded. The top part then becomes the citation editor. Not finished yet in following screenshot, citation template attributes still to be added. 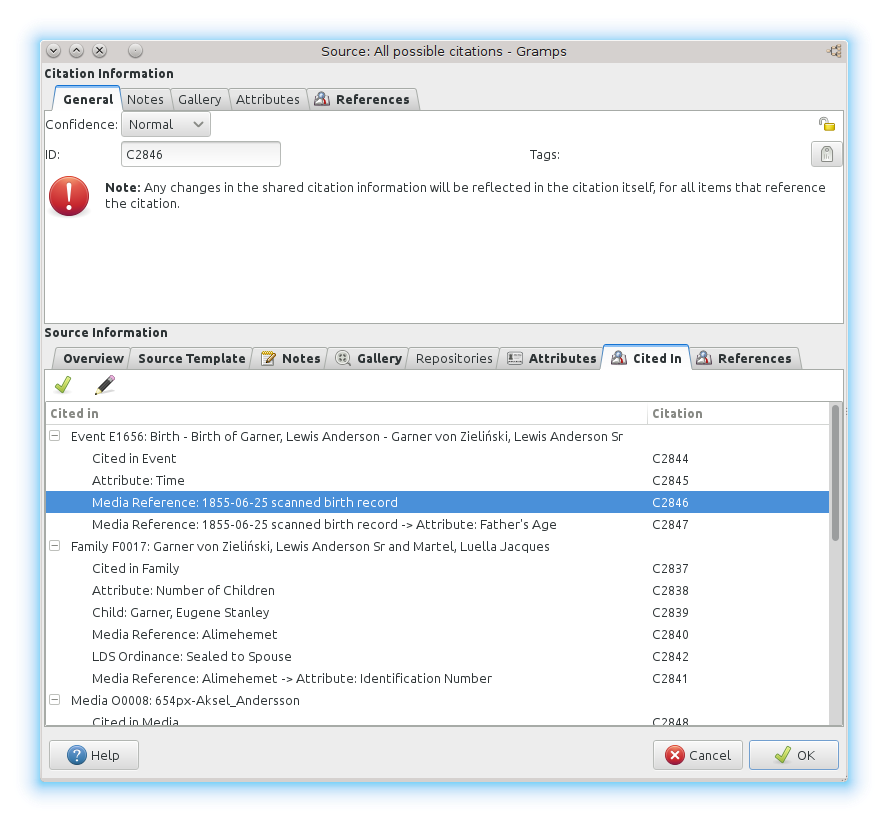 A Template tab allows selection of templates, and generates fields needed. These fields are stored to the attributes as the user types. Following screenshot is not yet finished version. Default citation fields will be added, as well as short versions as needed. 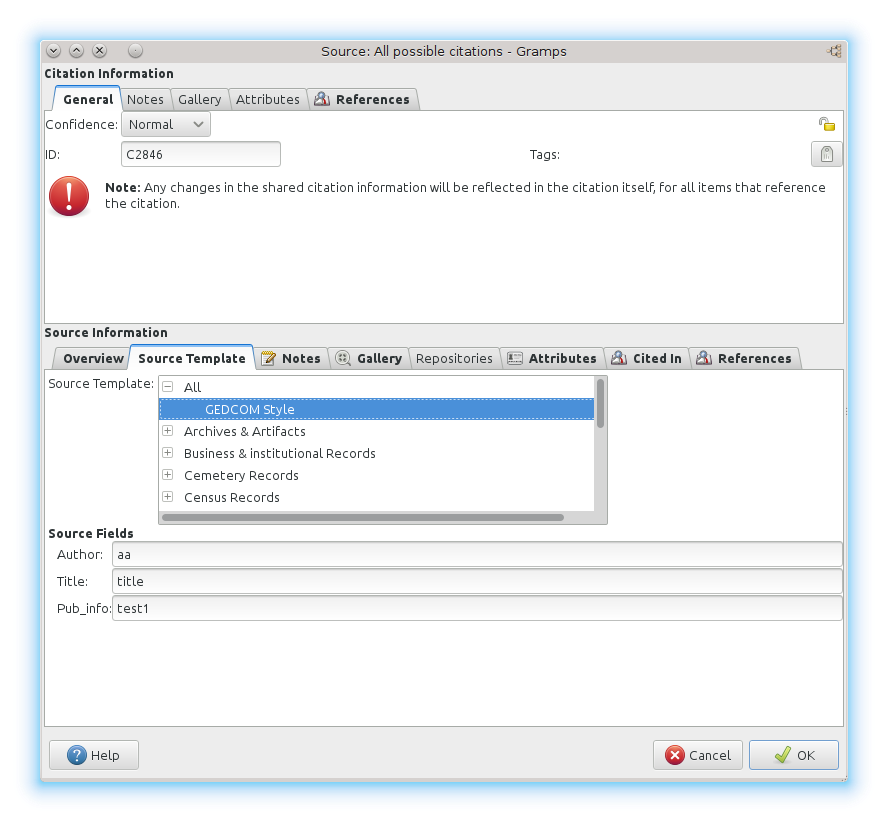 Working in the GEP 18 branch. To experiment with.

There are three broad alternatives for entering source data into a program, and GRAMPS should support all three:

When the end user cites a source for information, they would be prompted with a window where they would select a main type and drill down through subtypes, as in the first few columns of the table presentation I've given. Once it is selected, the user will be prompted for the required (and perhaps optional) fields specific for that type of source reference.

The user would select the type of the source, and fill in the fields, for L (biblio list), F (full citation), and S (short citation) at citation time. The templates I've provided would be in pop up menus for the user to select.

comment: popup is not very user friendly, better would be a wizard button on the source editor, this lets you define the source, asks for fields, and shows the automatic citation markup based on the templates at the bottom while user adds fields. On Save, all this data is saved in the attributes as needed. To investigate if a new field is needed on source editor.

comment: The fields to input for the source are the same regardless of how the citation is formatted for output. It's the output template's job to select and order the fields, provide common abbreviations, and so on.

comment: The formats that Mrs. Mills provides in Evidence Explained are examples, suitable for personal use. But she's published very widely as well as having edited a journal for many years and knows better than most that everyone has their own style. There should be a facility for customizing the output formats to suit the user or whoever is publishing the work.

Then, when generating a report that contains citations, the mark up needs to be done on the fields according to the specifications in the table method or template method I've provided. (e.g. substitute the variables, italicize, embed with the proper punctuation, etc. Remove optional variables (and their punctuation) if the variable was not input. Remove privacy fields unless a privacy flag is turned on so that things like home addresses and phone numbers of people aren't put in reports unless you "force" it.

And the first time a citation is encountered in a report, use the Full version (F). The second and succeeding times use the Short (S) version. And when a bibliography is called for, use the L (List) template for that.

The templates would be stored in an internal database, as would the completed citations for storage and retrieval.

But, these would only be a (good) starting set. Part of the beauty of this parametrization is that the end user can use the language of the mark up in this table or template to define his own source style, punctuation, field quoted or italicized, etc. So in essence, any source output style can be accommodated, and is under full control of the end user. Evidence Style templates can be supplied as a starting set, not the only set. New Evidence Styles can be added, old ones deleted or modified, as the user wishes.

Instead of a one size fits all editor window, a template-controlled window (or wizard, but wizards get annoying for experienced users) would display a set of fields tailored to the selected source type.

A Multiline widget could be available for displaying the long-form citation as one filled in the fields; pasting or typing into the Multiline would be parsed and would change the field entries. This would speed entry for expert users and could be used by anyone to paste in citations provided by database websites like Ancestry.com.

Continued support of GEDCOM and GrampsXML is of course given. A BibTex, MODS, or Citation Style Language import/export of source data would allow easy interchange with bibliography managers like Zotero or EndNote.

Several approaches are available for storage of this more elaborate source data:

The present author favors a combination fixed table with mapped common fields and an auxiliary key/value table for additional elements which are less commonly used. An important consideration is the ability of users to fashion their own source types: Mrs. Mills has provided templates for those types she thinks researchers are most likely to encounter, but could not possibly have provided for every available source-type.

Additionally, some source-types require additional information which doesn't fit well into a database field format. One example is records in private hands: Mrs. Mills recommends including the provenance of the record showing that it indeed indicates the individuals claimed. Such a provenance is best recorded in a source note. She also stresses the importance of a detailed evaluation of the source by the researcher, and this evaluation is also best recorded in a source note.

Reports use the new citation style, using templates to build the citation.