From Gramps
(Redirected from Events)
Jump to: navigation, search

An overview of the predefined events in Gramps are given, with their meaning.

Events form a core concept in genealogical research. It is important therefore that the terminology and usage is consistent and well defined, so as to allow for optimal communication, translation and portability.

An "event" is an umbrella term, and is used loosely to denote a fact about an individual, an event proper that occurs in his or her life, or an attribute. As examples, every individual has a birth event, and eventually a death event. Children being born to the individual would also be events. Being childless however is an attribute or fact about that individual.

Generally setting an event for an individual allows you to to enter a data set, including the date, description, associated place, etc, in a structured way.

In Gramps you define an event as belonging to a event type. This is useful as it allows the grouping of events under a common denominator, the event type. When creating an event, you must first select the event type. This can be any of the predefined events, or you can create a custom event just by typing a name.

The pre-defined events provide most of what you need. For the sake of frivolity however, let us imagine that great uncle George was a lothario, and proud of it, and insisted that you recorded details of his numerous conquests in exchange for some vital genealogy documents that you need. You could then define an event type "affairs", and then in his individual record enter one such event for each affair, entering the date, place, details, etc for each. You then end up with a list of all his affairs listed chronologically.

Frivolity apart however, defining too many event types can be problematic, and in many cases it might be better practice to group events under the same event type, and instead use the description field to add an extra nuance.

Let us first provide an overview of the predefined events types available in Gramps, and then later mention event types that are not in that list. 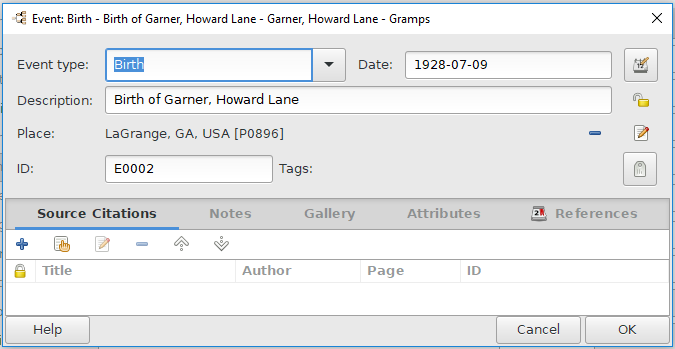 The use of most event types is self explanatory, and the best way to familiarize yourself with them is simply to set to and dabble with the Event Editor! However, some events need more careful exploration as they introduce concepts that are not obvious at first.

This type is for events related to childhood adoption. Typically the event is added to the individual being adopted, with this person playing the primary role. Administrators, civil servants and parents can be added to the event with different event roles

The adoption event can be added for the process of adoption (which can take several months), but also as a placeholder for an adoption certificate that you have as a source.

On adding the person to the family he is adopted into, one should also set his relationship with his adoptive parents to adopted. This doubles the event information somewhat, but is used in some reports.

The event of baptism (not LDS), performed in infancy or later

The event of entering into life

Disposal of the remains of a person's body by fire

The event when mortal life terminates

An event of dissolving a marriage through civil action

An event of filing for a divorce by a spouse

The marriage event is a bounding ceremony between two people before an official body. In other words, it is the state of being united to another person in a consensual and contractual relationship recognized (normally) by law.

You should hence use this event typically as the 'official' starting event of the family unit in Gramps, that is, use it as a family event, with event role family. Note that the family could be missing a father, mother or both. Sharing an event with roles bride and groom is not the recommended approach in Gramps.

Note further that the marriage event is wider than what is used in day-to-day language. It indicates civil marriage, church marriage, and all other types of union between adults that is official.

To indicate an official end of a marriage event, one should use the Divorce event.

An event of creating an agreement between two people contemplating marriage, at which time they agree to release or modify property rights that would otherwise arise from the marriage

An event of obtaining a legal license to marry

An event of recording a formal agreement of marriage, including the prenuptial agreement in which marriage partners reach agreement about the property rights of one or both, securing property to their children

Declaring a marriage void from the beginning (never existed)

Indicator of a level of education attained

An event of awarding educational diplomas or degrees to individuals

An event of judicial determination of the validity of a will. May indicate several related court activities over several dates

A legal document treated as an event, by which a person disposes of his or her estate, to take effect after death. The event date is the date the will was signed while the person was alive

A religious event of bestowing divine care or intercession. Sometimes given in connection with a naming ceremony

The act of baptizing and/or naming a child

Confirmation is a religious sacrament, ritual or rite of passage practiced by several Christian denominations and Reform Judaism. The term is intended to reflect a strengthening or deepening of one's relationship with God and church.

A religious rite, the first act of sharing in the Lord's supper as part of church worship

The event of the periodic count of the population for a designated locality, such as a national or state Census

The event of obtaining citizenship

A description of the cause of death

The type of work or profession of an individual

Pertaining to a religious ordinance in general

See Custom Event Types for some event types that are currently used by some users.

Gramps uses a number of Fallback events in lists and views when one of the main life events is missing.

As an example, a person's Baptism event may be known but not the Birth event. In the lists and views if there is no Birth event, the date of the Baptism is used where the birth date would normally be displayed. When these dates are used, the date will be displayed in italics.

The Fallback events are:

Death
Burial, Cremation or Cause of Death

Event types not available in Gramps

The Draft Lottery was a practice in general use, used to select who should have to undertake military service. Before the advent of a permanent professional army, it was not feasible to train all young boys, so some selection process was needed to determine who would or would not be drafted. So as to make this a fair process, it was common practice to organise a lottery, into which all boys of certain age had to be entered.

The documents pertaining to these lotteries form an useful source of genealogical information, as all boys of a certain age were required to participate.

This event type should be used for all the events/attributes relating to a Draft Lottery, for example:

a) the lottery itself. This is associated with a place, and a specific date.

b) legal documents relating to the lottery. Boys from rich families who were selected to join the army by the lottery process frequently paid commoners to take their place. Legal contracts were drafted for this.

c) desertion documents concerning the lottery. Many selected individuals emigrated abroad so as to avoid their draft, with the consequence that they were recorded as deserters in their home country. In genealogical research this event can prove very difficult to trace, as deserters often changed their name to evade detection.

PhpGedView lists the naming conventions in GEDCOM standard between : Events and Facts.

That overview notes an (occasionally blurred) distinction that Events are given additional context with a date or place, Facts do not need that context.

Gramps typically stores generic Fact data as an Attribute, especially if that Fact might be useful for profiling.