Fixing a bug always starts with reproducing it, and many times the developer does not succeed in that. Making that possible is the aim of triage.

The bug/issue tracker for Gramps is located at the following URL: https://gramps-project.org/bugs

The goal of bug triage is to make it easier for developers to do development by organizing the bug list for them. This means the developers are able to spend less time asking bug reporters what the problem is, confirming if it is still an issue in the latest master branch in Git.

Bug triage includes the reduction of open tickets, removal of stale/out of date tickets, and grouping of feature requests. 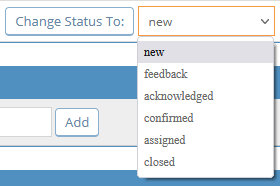 Make sure you're using the current 5.1.5 release of Gramps, using the master branch in Git is usually best. From a clean install of Gramps attempt to reproduce the bug that is being reported. If you cannot reproduce the bug, post a comment as such - explaining the steps you took to reproduce the bug. If you encounter a different bug, file a new bug report for that problem if one has not been filed already.

This information is for the developers following up on the submitted issues.

The Roadmappage of the bug tracker lists the bugs currently prioritized for the next releases. If you are looking for a bug to fix, this is a good place to start. Placement on the roadmap is controlled by the "Target Version" field for the bug. Special "X.Y.99" phony releases, such as "3.4.99" and "4.0.99", list bugs that we would eventually like to fix for the "X.Y" version, but don't really know the milestone yet. Bugs that really should hold up a release should be on the roadmap with a real release number, and should only be moved after giving a reason or heads up on the devel list [1]. If you fix a bug scheduled for a later milestone before a previous one is out, please manually adjust the target release field before marking the bug resolved, otherwise the roadmap display will be inaccurate [2].

In general, when resolving an issue, it is always a good idea to add a note with the “commit hash” (also called the Git commit “reference” or “SHA”) of the commit that fixed the problem.

When resolving issues in a maintenance branch, one should always set the "Fixed in version" field to the version of the next release that will be made from that branch. This is done so that the issue properly appears in the Change Log page for that project.

If you don't have MantisBT permissions (the ability to change bugs' status from "new" to "feedback", "acknowledged","confirmed", "closed" or "resolved"), then feel free to ask on the gramps-devel mailing list for someone to set the status for you (eg: "Could someone set bug #1 to "closed" please?). Once you do this enough, feel free to ask for MantisBT permissions on the same mailing list.